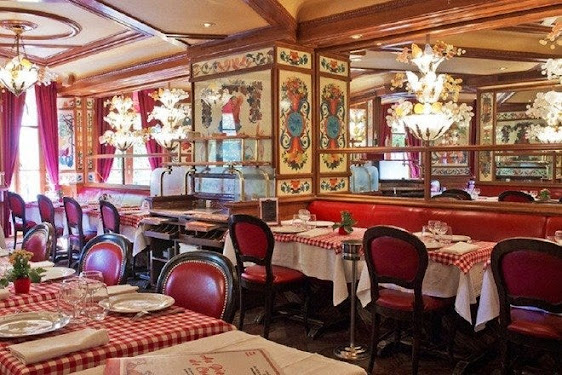 A bit of backstory. Paris is not a 24 hour city. This can be hard for Americans to understand because we are used to everything being open 24 hours a day. There’s nothing we can’t have when we want it.

Paris is not that city. You have to have special permission from the city, and a lot of those establishments that do have had them for almost 100 years. If you walk around Paris after 9pm it’s a dead zone. It’s kind of crazy how quite the streets are. The lights are off in the apartments, and it’s like the whole city just goes to sleep.

There are but a few, and I do mean few, places that are open at night. The Louvre post office (which isn’t in the Louvre), the 24 hour tabac at Clichy (I once saw a girl OD in the doorway of that tiny place), a few 24 hr pharmacies, and Au Pied de Cochon near Les Halles.

I first heard of this place from a few different people but no one was actually like “let’s go” until one night when I met these guys from the American Embassy. We were drinking, and one of the guys and I got hungry. Like most drunks we wanted a giant French burger (the French think if you just put a lump of meat between bread that's all you need, there's no style to it), so while the other guys went home, we decided to get a burger at Pied de Cochon. Granted I was very drunk and barely remember it, but that was the first time I finally patronized the mythical 24 hour restaurant.

Let that sink in. An actual restaurant open 24 hours in the retirement home of Europe (Paris).

There is another place, a gay bar in the Marais that’s open 24 hours as well but I’ve never met anyone who has actually eaten in it, and I think it only serves food during certain hours. I’ve only been in it a few times because it is the only place in the Marais that you can buy cigarettes when all of the tabacs have closed. Update: it now closes at 2am. With Covid nothing is sacred.

Pied de Cochon is a quintessential Parisian brasserie. Famous for it's pig parts (I don't eat pork), it serves classic French food and is kind of a throwback to bistros of the past. It looks like something from the Belle Époque (except it opened in 1947). Apparently it's uber famous with celebrities, politicians, and various rich people, but I think because it's old fashioned and touristy, the clientele tends to border on older.

I was hungry one night, and up, and I remembered it, and wondered how it had fared with Covid.

Turns out it is no longer 24/7. Which is a shame. It boasts that it has never closed its doors since 1947, but I guess it does now. One of the few, if not only places to welcome in hungry people at 3am is no more.

You can still eat until 1am on the weekends, which is later than 11pm, when all of the other restaurants close. That’s assuming you want to drag yourself to Les Halles. I guess you gotta ask yourself: how desperate are you?